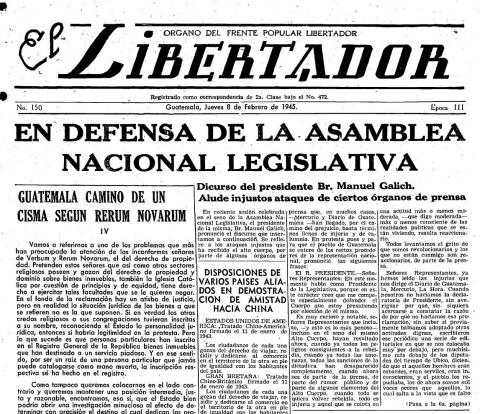 CRL now hosts more than ten million pages of primary source publications, archives and other rare or unique materials, digitized from CRL collections and accessible for scholars at member institutions.

El Libertador was the organ of the Popular Liberation Front in Guatemala, a pro-democratic political party drawing support from university students and middle class following the overthrow of General Jorge Ubico. During the Guatemalan Revolution of 1944, the FPL backed Dr. Juan José Arévalo, who became the first popularly elected president of Guatemala, serving in office from 1945 to 1951.

Preserved by the Benson Latin American Collection at the University of Texas at Austin and acquired by LAMP in 2012, El Libertador is one of several political newspapers and periodicals from this significant period in Guatemala's history held by CRL/LAMP, including El Independiente [1944], La República [1944-45], and La Revolución [1945-47].

At CRL’s 2018 Global Collections Forum, Julie Sweetkind-Singer, Head of Branner Earth Sciences Library and Map Collections at Stanford University Libraries, discussed how satellite imagery and large geospatial datasets are being used as source materials for scholars in a variety of disciplines, and the new types of library support they require.

In FY 2018 the Middle East Materials Project (MEMP) microfilmed Arab-language publications from several diaspora communities in non-Arab countries, including the UK, Japan, the U.S., and Poland. These resources continue to affirm MEMP’s role as a provider of rare and distinctive documentation for scholars.
END_OF_DOCUMENT_TOKEN_TO_BE_REPLACED