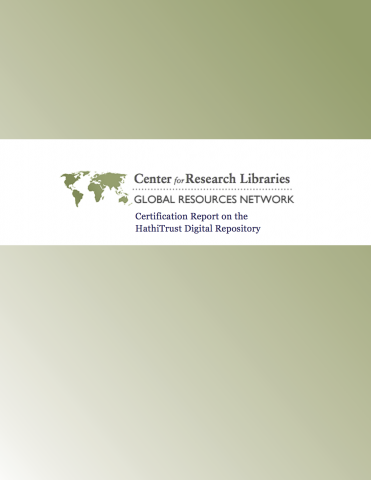 The Center for Research Libraries (CRL) conducted a preservation audit of HathiTrust (www.HathiTrust.org) between November 2009 and December 2010, and on the basis of that audit certified HathiTrust as a trustworthy digital repository. The CRL Certification Advisory Panel concluded that the practices and services described in HathiTrust public communications and published documentation were at the time of the audit generally sound and appropriate to the content being archived and the general needs of the CRL community. Moreover the Panel expected that in the future, HathiTrust would continue to be able to deliver content that is understandable and usable by its community.

This certification is based upon a review of extensive documentation gathered by CRL and members of its Certification Advisory Panel; data and documentation provided by HathiTrust between November 2009 and December 2010; and a site visit held in May 2010. CRL’s analysis was guided by the criteria included in the Trustworthy Repositories Audit and Certification Checklist (TRAC), and other metrics developed by CRL through its various digital repository assessment activities.

CRL conducted its audit with reference to generally accepted best practices in the management of digital systems; and with reference to the interests of its community of research libraries and the practices and needs of scholarly researchers in the humanities, sciences and social sciences in the United States and Canada. The purpose of the audit was to obtain reasonable assurance that HathiTrust provides, and is likely to continue to provide, services adequate to those needs without material flaws or defects and as described in HathiTrust’s public disclosures. The CRL audit provides a reasonable basis for these findings.

CRL assigned HathiTrust the following levels of certification (the numeric rating is based on a scale of 1 through 5, with 5 being the highest level, and 1 being the minimum certifiable level): [1]

The ratings reflect the existence of robust systems and sound processes in most areas, in particular in category C; and still emerging systems and processes in category A and, to a lesser extent, in category B. In the course of the audit, the Certification Advisory Panel identified several issues that CRL urges HathiTrust to address to more fully to satisfy the concerns of CRL libraries. Those issues are described in Section B of the report, Detailed Audit Findings, and pertain to specific criteria in the TRAC checklist. HathiTrust agreed to address these issues and, as a condition of continued certification, to make certain disclosures to CRL periodically. Those requirements for periodic disclosure are outlined in Section C of the report.

Archiving and preservation
All Reports