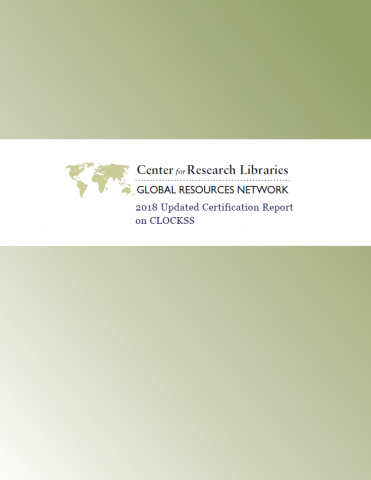 The Center for Research Libraries (CRL) conducted a preservation audit of CLOCKSS (www.clockss.org) between September 2013 and May 2014 and revisited that audit in 2018. Since 2014 CLOCKSS has continued to grow and to add significant new content and functionality to the archive.  Based on those audits, CRL hereby reaffirms its certification of CLOCKSS as a trustworthy digital repository of e-journal content. In consultation with its Certification Advisory Panel, CRL has concluded that the practices and services described in CLOCKSS’ public communications and published documentation generally correspond to the operations of CLOCKSS and are appropriate to the e-journal content being archived, and to the expressed needs of the CLOCKSS designated community.  Moreover the panel expects that in the future, CLOCKSS will be able to deliver the content it preserves to appropriate third parties who are equipped to make it available for the use of the designated community.  CRL certification applies to the repository’s ability to preserve and manage digital content deposited by participating e-journal publishers as of September 2018.

The present report is based upon review, by CRL and the members of its Certification Advisory Panel, of extensive documentation gathered by CRL independently from open sources and from third parties as well as new data and documentation provided by CLOCKSS.  The initial audit included a 2014 site visit by CRL personnel to the offices of the LOCKSS team in Redwood City, California.CRL's recent evaluation of CLOCKSS and the information provided in this report took into account the policies, systems, and procedures in place at CLOCKSS to manage e-journal content as of September 2018, as reflected in documentation provided to CRL by CLOCKSS in fulfillment of the ongoing requirements specified in Section C of the 2014 certification report.

In the 2014 audit, the Certification Advisory Panel identified one issue that CLOCKSS needed to address to more fully satisfy the concerns of its research library constituents: the lack of a formal succession plan. This requirement has since been satisfied. A Succession Plan Agreement was signed in October of 2018 by Stanford University and the other successor nodes.  In the agreement, Stanford will assume temporary ownership of the CLOCKSS Archive and all its obligations. Stanford and the other successor nodes (the University of Alberta, the University of Edinburgh, and Humboldt University) agree to host CLOCKSS content.  The successor nodes agree to continue to operate the LOCKSS preservation software preserving the CLOCKSS Archive content and providing open access to this content.

Two other aspects of CLOCKSS operations should be understood by stakeholders, as they may have a bearing on future CLOCKSS services.  Those issues are described in Section B, Detailed Audit Findings, below, with reference to the corresponding criteria in the TRAC checklist.  CLOCKSS has agreed to continue to make certain disclosures to CRL periodically, as a condition of continued certification.  Ongoing requirements are outlined in Section C of this report.

CRL assessed CLOCKSS on each of the three categories of criteria specified in TRAC, and has assigned the level of certification below for each. The numeric rating used is based on a scale of 1 through 5, with 5 being the highest level, and 1 being the minimum certifiable level.

The basis for assigning these ratings is provided in the Detailed Audit Findings section of the audit report .

Archiving and preservation
All Reports