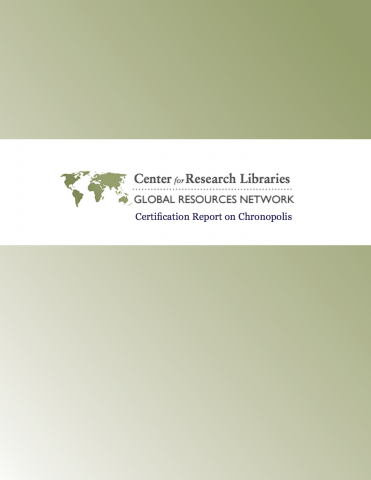 The Center for Research Libraries (CRL) conducted a preservation audit of Chronopolis (chronopolis.sdsc.edu) between November 2010 and December 2011, and on the basis of that audit certifies Chronopolis as a trustworthy digital repository. The CRL Certification Advisory Panel has concluded that the practices and services described in Chronopolis’ public communications and published documentation are generally sound, and appropriate to the content being archived and to the general needs of the designated Chronopolis community. Moreover the Panel expects that in the future, Chronopolis will continue to be able to deliver content that is manageable and usable by that community.

CRL certification applies to the repository’s ability to preserve and manage digital files and data deposited by the Inter-university Consortium for Political and Social Research; and diverse sets of data files from the California Digital Library, North Carolina Geospatial Data Archiving Project, and the Scripps Institution of Oceanography.

This certification is based upon review by CRL and the members of its Certification Advisory Panel of extensive documentation gathered by CRL independently from open and third-party sources as well as data and documentation provided by Chronopolis.  The review also included a site visit by CRL audit personnel to the San Diego Supercomputer Center on October 26, 2010.

The overall conclusion of the panel was that Chronopolis can be recognized by the designated community as a trustworthy repository with certain important considerations.  One consideration is the level of preservation service Chronopolis provides.  The repository’s mission statement identifies Chronopolis’ goal as providing "a preservation data grid and its supporting human, policy, and technological infrastructure."  However, Chronopolis does not commit to services beyond preserving intact the bits deposited in the repository.   This limitation is clearly expressed in the Chronopolis subscriber license agreement, which disclaims responsibility for performing specific “preservation actions” that some other repositories provide, such as format migration, file normalization, file type verification, and creation of descriptive metadata.  Because this limitation is clearly communicated to Chronopolis stakeholders, Chronopolis can be said to provide preservation services adequate to its community.

The second consideration is Chronopolis’ relatively nascent and untested administrative infrastructure and business plan.  At the time of this review Chronopolis was transitioning from being a largely grant-supported project to a university-based service that is expected to provide digital storage for research data in a variety of fields on a fee-for-service basis.  Chronopolis had also established strong partnerships with the organizations hosting its three modules, and has secured commitments from those organizations to cover their own respective costs for the next several years.

Enlarging the Chronopolis client base, however, will be critical to sustaining the service and its infrastructure in the coming years.   The repository’s operating costs will have to be shifted from federal, university and partner subsidies to the Chronopolis “designated community,” i.e., the data producers, owners and users.  Therefore, periodic review and perhaps recalibration of Chronopolis policies, procedures, costs, and fee structure in the future will be essential to ensuring the success of the next phase in the repository’s growth.