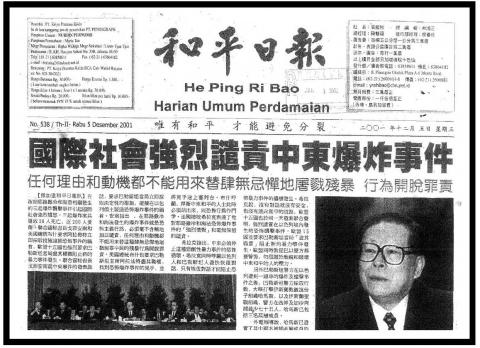 Bulletin Kantor Berita PAB (Indonesian language edition) September 1972-July 1976
This is a general interest daily newspaper, published in Jakarta. The English version of this title is more widely held in North America, but it has fewer pages per issue, and the content is not the same as this rarely held Indonesian language version. Carole Atkinson at Cornell University coordinated this project.

Buletin Laskar Jihad Ahlus Sunnah wal Jamaah February 2001-July 2002
Laskar Jihad was a leading militia in Indonesia in the early 2000s. It was known for its involvement in the violence that besieged Maluku and other parts of Indonesia during that time.  Not yet preserved elsewhere, this newspaper provides a plethora of information about how the Laskar Jihad militia defined itself, its views, and the information it provided to followers and potential recruits. This project was coordinated by Fe Susan Go at the University of Michigan and Carole Atkinson of Cornell University, using holdings from both of these institutions.

Cenderawasih Pos January 2015-December 2016
Issues from 2015-2016 of this newspaper from West Papua expand SEAM's holdings to cover 1999-2016. They were provided by the University of Hawaii, the only library in North America that subscribes to this title. The project was proposed by Rohayati Paseng of the university.

Harian Indonesia = Yindunixiya ri bao January 2001-December 2002
Harian Indonesia, an established newspaper with a history of more than 40 years, was the only Chinese language newspaper allowed to be published during the Suharto regime. Today the paper, published in Jakarta, is run privately by PT Emas Dua Ribu, an associated company of MAHAKA MEDIA. In January, 2007, Harian Indonesia was relaunched as Sin Chew-Harian Indonesia, with editorial content management from Sin Chew Media Corporation Berhad. Within a short period, circulation sales grew to 30,000 copies per day in the Jakarta region alone, with a readership of over 100,000. According to WorldCat, only Ohio University Libraries has holdings for this paper in the United States. Jeffery Ferrier and Yan He of Ohio University coordinated this project.

Harian Umum Perdamaian = 和平日報 = He ping ribao  February 2000- September 2002
Published in Jakarta beginning in 2000, this is the only Chinese language newspaper in Indonesia founded and run mainly by Chinese people. Due to reduced circulation, it has changed from a daily newspaper to weekly issues.

Radar Bogor  March-December 2011
This title began publication during the post-Suharto period in Indonesia and continues to be published today. Issues from 1999 through February 2011 were previously microfilmed by SEAM and stored at CRL; more recent issues are not preserved elsewhere, though copies are available online. The newspaper is notable for its coverage of local events and politics in Bogor and the surrounding region, while including national news and some international coverage as well. This project was coordinated by Fe Susan Go at the University of Michigan and Carole Atkinson of Cornell University, using holdings from both of these institutions.

At CRL’s 2018 Global Collections Forum, Julie Sweetkind-Singer, Head of Branner Earth Sciences Library and Map Collections at Stanford University Libraries, discussed how satellite imagery and large geospatial datasets are being used as source materials for scholars in a variety of disciplines, and the new types of library support they require.
END_OF_DOCUMENT_TOKEN_TO_BE_REPLACED