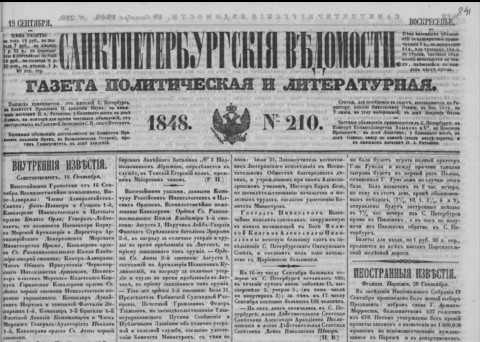 CRL and East View Information Services have opened the first release of content for Imperial Russian Newspapers, the fourth Open Access collection of titles digitized under the Global Press Archive (GPA) CRL Charter Alliance. This collection adds to the growing body of Open Access material available in the Global Press Archive by virtue of support from CRL members and other participating institutions.

The Imperial Russian Newspapers collection, with a preliminary release of 230,000 pages, spans the eighteenth through early twentieth centuries and will include core titles from Moscow and St. Petersburg as well as regional newspapers across the vast Russian Empire. Central and regional “gubernskie vedomosti” will be complemented by a selection of private newspapers emerging after the Crimean War in 1855, a number of which grew to be influential.

Much of the content was made available thanks to the active support of the National Library of Russia, which maintains one of the largest newspaper libraries in the world. The Imperial Russian Newspapers collection will eventually include two critical e-book reference resources containing an in-depth bibliographic record of all known newspapers published in Imperial Russia.

Preliminary bibliographic records for this collection have been created and are available in CRL’s catalog for export or via WorldCat. Records will be made available in WorldShare Collection Manager as collections are finalized, and member institutions may also receive records directly from CRL for local loading.

East View has released a top-level landing page (https://gpa.eastview.com/) that enables cross-searching across all GPA platform titles accessible to your institution including CRL Alliance content. Contact East View to enable cross-searching of institutionally-purchased content and any custom newspaper digitization projects hosted on the platform.

Alongside its member institutions, CRL is committed to making diverse content as openly accessible as possible through innovative partnerships and models that promote equity of access. Through the support of the GPA Charter Alliance, CRL and East View are producing nine distinct collections of content prioritized by CRL members, with six of those collections consisting of public domain or “orphaned” material made available via open access worldwide. In addition to hosting content on the GPA platform, East View provides all files and metadata to CRL for local hosting, with eventual support for computational analysis.