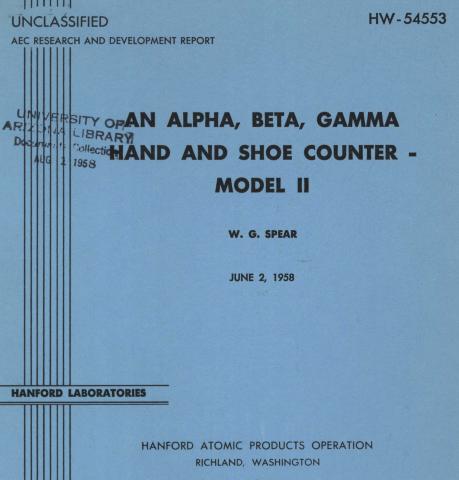 The Hanford Reservation in south central Washington is one of several historic weapons-production sites in the United States that were identified and created within months in the early 1940s when it became clear to the U.S. government that efforts to create a new, more powerful weapon would influence the outcome of World War II. In addition to Hanford, Oak Ridge, Tennessee, and Los Alamos, New Mexico, were the top secret locations where nuclear weapons were produced.

After the war, the Atomic Energy Commission (AEC) was created to direct peacetime development of atomic science.  Large numbers of technical reports began flowing out of national laboratories researching nuclear science, commercial uses of nuclear power, and radioactive materials and their effects on people and the environment.

The United States government took possession of this area in January 1943. 1500 residents of the former towns of White Bluffs and Hanford were evacuated on 30-day notice in early 1943. A massive temporary camp was built that accommodated 51,000 workers over the next 2 years. The Hanford site was in use until 1987 for plutonium production, initially for weapons and later for energy generation. These 40+ years of nuclear reactor use produced solid and liquid wastes that are now in the cleanup phase.

In 1989 a Tri-Party Agreement brought together DOE, U.S. EPA, and Washington State Department of Ecology to bring the reservation into compliance with federal and state environmental regulations. In the intervening years, six reactors have been cocooned, hundreds of support buildings demolished, and new treatment and processing facilities built.

Over 560 technical reports produced at Hanford are available in the TRAIL library, identified by an ‘HW’ prefix. These include:

The Department of Energy offers several tour options of the Hanford Site, a 586-square-mile reservation in south central Washington State. In May 2015, TRAIL Steering Committee member Marilyn Von Seggern (Washington State University) took part in a Hanford Public Tour, a five-hour bus trip that loops through the reservation, stopping at the Cold Test Facility, the B Reactor (now a National Historic Landmark), the Environmental Restoration Disposal Facility, the Plutonium Finishing Plant, the Groundwater Treatment System, and the Waste Treatment Plant. The first half of the tour follows the course of the Columbia River, which played a crucial role in the process by supplying fresh water to cool the graphite in the nuclear reactors.

For many visitors the stop at the B Reactor, on the north edge of the reservation, is the highlight of the tour. It was the world’s first full scale plutonium production reactor when it was built in 1943-44. The 2,004 aluminum process tubes that contained the uranium fuel slugs are visible in the reactor core, and the control room and offices, with period furnishings, can be visited.

Clean-up of the site has achieved some remarkable accomplishments. Twelve billion gallons of groundwater have been treated and more than 12,000 out of 15,000 cubic meters of plutonium-contaminated waste have been retrieved and shipped offsite. But the project will not be completed until 2060, and is budgeted at approximately $2 billion per year.

Thanks to Marilyn Von Seggern for contributing to this article.

Science and technology Collections
See All

At CRL’s 2018 Global Collections Forum, Julie Sweetkind-Singer, Head of Branner Earth Sciences Library and Map Collections at Stanford University Libraries, discussed how satellite imagery and large geospatial datasets are being used as source materials for scholars in a variety of disciplines, and the new types of library support they require.
END_OF_DOCUMENT_TOKEN_TO_BE_REPLACED