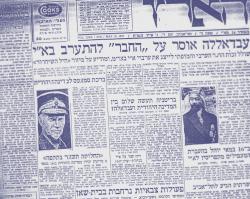 Front page of Haaretz, on May 12, 1948, two days before Israel declared its independence. CRL From CRL collections.

Through the 2011 Purchase Proposal Program, CRL has obtained microfilm of the newspaper Haaretz from Tel Aviv (1919–63). Since its establishment nearly a century ago, Haaretz, Israel’s oldest daily and most widely read morning newspaper, has provided coverage of pre-1948 Palestine under Ottoman rule, the British Mandate, and later the emerging State of Israel, the Jewish world, as well as broader aspects of the Middle East. Most CRL member institutions who receive print editions do not archive it.

The paper was founded in 1919 in Jerusalem as Hadashot Haaretz (News of the Land), by a group of Zionist immigrants, mainly from Russia. Among its staffers was the Revisionist leader, Ze’ev Jabotinsky. The writer Ahad Ha’am was a frequent contributor during the early years.

The newspaper subsequently shortened its title to Haaretz (The Land) and moved to Tel Aviv in 1922, where it remains to the present day. In 1935, the paper was bought by Salman Schocken, a businessman and prominent Zionist from Germany who had recently settled in Palestine. His son, Gershom, took over the editorship in 1939 and headed the paper until his death more than 50 years later, in 1990. Since then, Gershom Schocken’s son, Amos, has served as publisher of Haaretz.

Although Israel has around 22 privately owned dailies, Haaretz is considered the most influential and respected for both its news coverage and its commentary. Haaretz describes itself as “an independent daily newspaper with a broadly liberal outlook both on domestic issues and on international affairs.” Its journalistic staff includes 330 reporters, writers, and editors. The paper is famous for its editorial page, where senior columnists, including some of Israel’s leading commentators and analysts, reflect on current events. It currently covers defense, diplomacy, the Arab- Israeli conflict, the peace process, Israeli politics, international affairs, and general Middle Eastern affairs. It uses a smaller typeface than other Israeli dailies so that it can fit twice the amount of material onto each page.

Haaretz has a typical circulation of 75,000 on weekdays and 95,000 on weekends. Most of its readers are regular subscribers; newsstand sales account for a relatively small proportion. The current edition of Haaretz is now available on the Internet in both Hebrew and English versions.