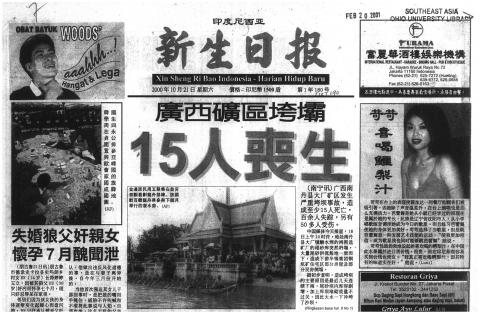 For over thirty years during the reign of President Suharto Chinese-language publications, including newspapers, were banned in Indonesia. Only the government- sponsored Yindunixiya Ribao (Indonesian Daily) was permitted, with an aim toward communicating the Indonesian government’s voice to the Chinese community. (Hoon 2005: 97)

Harian Hidup Baru was one of the newspapers started after the fall of President Suharto, beginning publication in February 2000. Ohio University Libraries was the only holding library for this title in the United States according to the Worldcat database.  Since SEAM has microfilmed it and made it available on microfilm from the Center for Research Libraries, this title is now much more accessible to scholars interested in the social and political issues of this dynamic period.

While Harian Hidup Baru continued for less than three years, it was one of the publications that communicated important news and events to the Chinese community. "Viewing itself as one of the gatekeepers of Chinese culture, the post-Suharto Chinese-language press values the task of reviving Chinese education and supporting Chinese organizations . . .  preventing [Chinese language and culture] from vanishing in Indonesia.” (Hoon 2005: 112).

This project was proposed and supported by Ohio University staff members Jeffrey Ferrier, Curator of International Collections, and Dr. Yan He, Curator of the East Asian Collection and the Dr. Shao You-Bao Overseas Chinese Documentation and Research Center.

Hoon, Chang Yau (2005). "A Hundred Flowers Bloom: The Reemergence of the Chinese Press in Post-Suharto Indonesia." Paper presented at the 9th Biennial Conference of the Asian Studies Association Australia, in association with the International Society for the Studies of Chinese Overseas, Bendigo, Victoria, Australia.