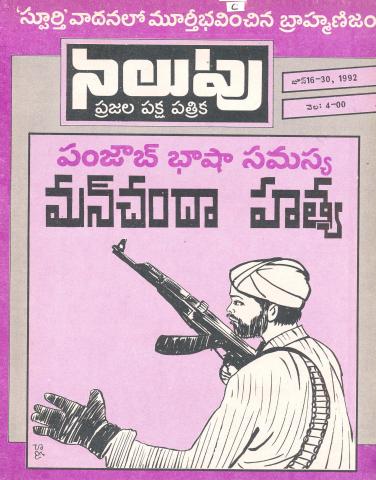 The South Asia Materials Project (SAMP) has digitized the magazine Nalupu (Black) for the entire run of its publication, April 1989-June 1993.  This is one of the pioneering magazines which brought together discussions of caste and class politics in the Telugu-speaking regions of India.

Following the Dalit massacre in Karamchedu in 1985, organizing began among Dalits in the Telugu-speaking regions of India. Gradually political parties of various hues were talking more about Dalit issues.  In 1989, the Hyderabad Book Trust began publishing Nalupu, in order to record the Dalit movement and the political thought behind the movement.

Nalupu will be of great interest and importance to scholars across a range of humanistic and social science fields. The publication will be of particular interest to scholars working in the field of twentieth-century South Asia, examining topics including South Asian literature, race, histories of the left and global Maoisms, studies of caste, intellectual history, anthropologies of the state, and translation studies. The Naxalite movement generated and was surrounded by a flurry of literary and cultural activity that grew in relation to it--whether by way of critique and/or of alignment--and that has not been adequately documented or studied.

Daily newspapers and cultural journals collected by LC's Field Office in Islamabad have been preserved through the efforts of MEMP and SAMP.
END_OF_DOCUMENT_TOKEN_TO_BE_REPLACED