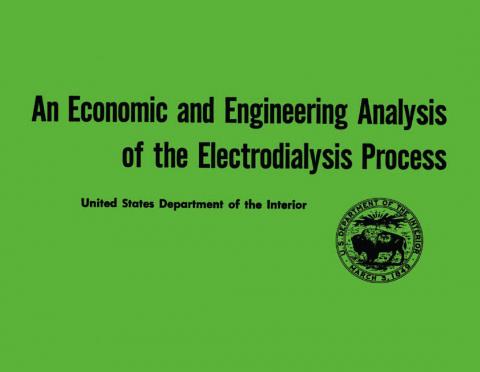 An Economic and Engineering Analysis of the Electrodialysis Process

TRAIL has completed digitization of the Research and Development Progress Reports series issued by the Office of Saline Waters (OSW) between 1955 - 1972. These technical reports are valuable resources for research topics including thermodynamics and water resource policy.

The OSW was established within the U.S. Department of Interior in 1955, continuing work initially begun through an Act of Congress in 1952. (“An Act to provide for research into and development of practical means for the economical production, from sea or other saline waters, of water suitable for agricultural, industrial, municipal, and other beneficial consumptive uses.”)

In the mid-twentieth century many areas of the United States--including California and the inland West--experienced acute water shortages and droughts. In 1951 the Secretary of the Interior noted that “Many Eastern cities, including New York City, Norfolk, Baltimore, Philadelphia, and New Orleans, as well as Midwestern and Western cities, are vulnerable to droughts; and sudden increase in the population or industry, such as that which would result from defense preparations or war, would cause serious water shortages in many areas.”

OSW issued 785 numbered reports in this series, covering a wide range of topics related to developing commercially viable desalination. All are now available through TRAIL as part of its mission to make historic federal technical reports more accessible. Examples include:

A longer article  on the OSW reports is also available.

Law and government Science and technology
See All