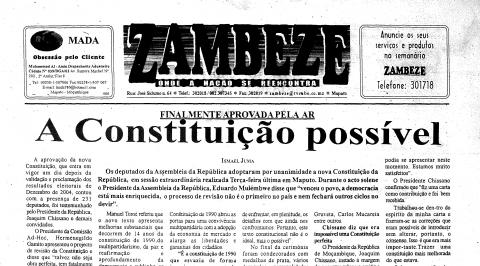 The Cooperative Africana Materials Project (CAMP) has microfilmed issues of the newspaper Zambeze for 2002-2013.  This material is now available for loan to CAMP and CRL libraries.

The Zambeze is an independent, weekly newspaper based published in Maputo, Mozambique. Its motto is "Where the nation is reunited". Not as old as some of the country's other newspapers, it claims approximately 10,000 copies circulated weekly. While some consider the newspaper's coverage of the government to be balanced, it has been known to make bold allegations concerning prominent political and legislative leaders' involvement in crime, such that there were concerns that it was a risk to press freedom [source].  In 2008, the Zambeze made international headlines when, after running a series of articles concerning drug trafficking, one of the named individuals attempted to buy up the entire weekly issue to dispose of it [source].

The years included in this microfilming project, 2002 to 2013, began notably with the nation's second President, Joaquim Chissano, choosing to step down rather than to run for a third term. The same year, independence war veteran Armando Guebuza was selected as the candidate backed by the Mozambique Liberation Front (Fremilo) for the presidency. He won the election in 2005 and these years span the majority of his two terms of office. This was a period marked by unprecedented economic growth for Mozambique, increased relations with China and a building dissatisfaction of the Renamo party with Frelimo's governance.

The holdings for this project were provided by the Library of Congress Field Office in Nairobi.