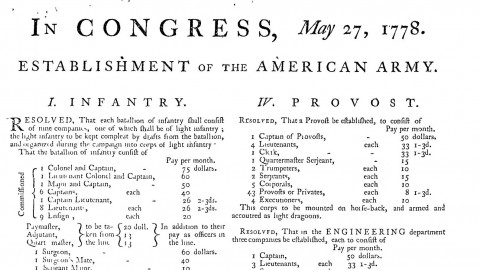 In January 2020, the Council on Library and Information Resources (CLIR) announced a grant awarded to the Law Library Microform Consortium (LLMC), CRL's Global Resources Partner in Law and Government, for the digitization and description of more than 500 reels of the Early State Records microfilm collection, a historic collection of early American law and government-related documents. The award represents the completion of LLMC's fundraising, in partnership with CRL, to provide digital access to this important set of primary source materials for the study of America from territorial times through the early twentieth century.

The Early State Records microfilm compilation was initially undertaken in the 1940s by the Library of Congress with the cooperation of hundreds of libraries and state and local agencies across the (then) 48 states. The project eventually captured 2.5 million pages on approximately 2,000 reels of microfilm. The collection includes constitutions and records and debates of constitutional conventions; statutes, journals, minutes, proceedings, and debates of the legislative bodies of the 13 American colonies; administrative, executive, and court records; local, county, and city records; contemporaneous records of the American Indian nations; as well as newspapers for British colonial America.

In 2016, LLMC undertook a campaign among its membership to raise funds for "Phase One" of the Early State Records digitization, including content from the states on the Atlantic seaboard (13 original colonies, in addition to Maine and Florida), as well as all the Native American documents in the collection. In 2018-2019, LLMC and CRL campaigned to raise funds from the CRL community to launch "Phase Two," covering the remaining 26 states and territories west of the Appalachians. CRL and LLMC members collectively raised more than half the funds required to complete this phase. CLIR's Hidden Collections award will ensure that this significant resource is discoverable and accessible to scholars and the general public.

Early State Records is one of LLMC's most substantial initiatives, applying advanced digitization post-processing and valuable abstracts to these primary and secondary sources held in numerous state, federal and foreign libraries, historical societies, archives, and legislatures. As of February 2020, LLMC has already added 2,700 Early State Records titles to its LLMC Digital online service. For additional information about Early States Records or LLMC, a non-profit cooperative of libraries dedicated to the twin goals of making available and preserving legal titles and government documents, please see www.llmcdigital.org or send an email to llmc@llmc-digital.org.

At CRL’s 2018 Global Collections Forum, Julie Sweetkind-Singer, Head of Branner Earth Sciences Library and Map Collections at Stanford University Libraries, discussed how satellite imagery and large geospatial datasets are being used as source materials for scholars in a variety of disciplines, and the new types of library support they require.