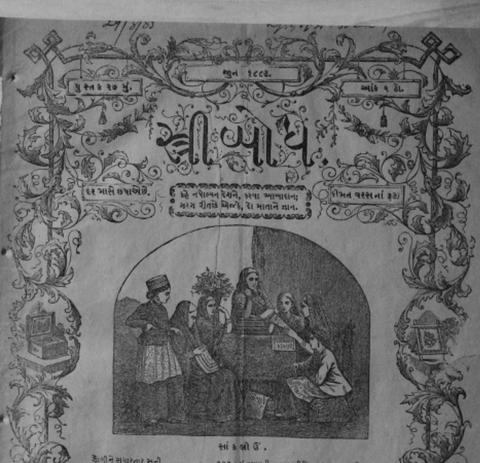 These titles are held and carefully preserved by the BJ Institute of Learning Research in Ahmedabad, Gujarat, as a legacy of the library collection of the Gujarat Vernacular Society, an important civil society organization in the late nineteenth and early twentieth centuries. Copies are scarce; no holdings of Sundarī subodha have been identified elsewhere.

Strī bodh, 1857-1944, was the first monthly magazine for women in the Gujarati language, edited by reformer Kekhusaro Navarojaji Kabaraji. As one of the earliest examples of an emerging Gujarati reading public, Strī bodh contains articles about and written by women. Not only does the magazine shed light on social reform efforts, particularly women’s education, it also provides a glimpse of the domestic lives of an emerging middle class in Ahmedabad whose livelihoods were often tied to its modern industrial textile industry. The aspirations towards modernity expressed in Stri bodh’s articles, stories, and essays can shed light on the history of the city and its place in national politics.

According to the History of Indian Literature, Sundari subodh (1904-1921) is a title “dealing with problems of social reforms, female education and widow remarriage. It published stories on the problems concerning women and had a section exclusively for women writers.” As one of the few publications that featured women writers in this era, it provides a means for scholars to consider the subjects and themes important to Gujarati women. It also provides evidence for the role that the Gujarati language played in shaping the distinct linguistic identity that became politically important to the Bombay presidency in the immediate aftermath of partition.

The holdings of these titles were identified by scholars Abigail McGowan (University of Vermont) and Lisa Trevedi (Hamilton College), and the project was proposed to SAMP and coordinated by Laura Ring, Librarian for Southern Asia and Anthropology at the University of Chicago.

At CRL’s 2018 Global Collections Forum, Julie Sweetkind-Singer, Head of Branner Earth Sciences Library and Map Collections at Stanford University Libraries, discussed how satellite imagery and large geospatial datasets are being used as source materials for scholars in a variety of disciplines, and the new types of library support they require.
END_OF_DOCUMENT_TOKEN_TO_BE_REPLACED