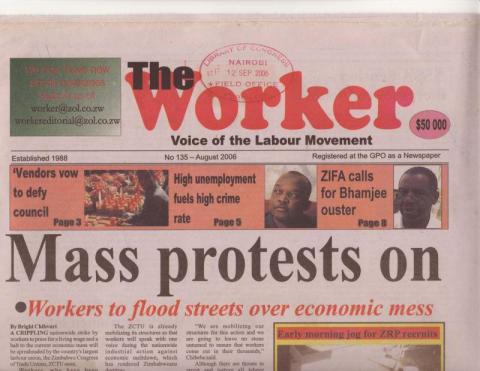 August 2006 issue of 'The Worker' from Zimbabwe

During the past several years, CRL’s Area Studies Microform Projects (AMPs) supported the preservation of more than 300 newspaper titles collected by the Library of Congress overseas offices, ensuring scholarly access to more than 450,000 pages of news from Africa, the Middle East, and South Asia.

Since 2006, the AMPs have worked with the Library of Congress overseas operations to acquire and preserve contemporary news—content ranges from the 1980s to the present—from twelve countries in Africa, the Middle East, and South Asia. Newspapers from several areas of recent conflict, including Iraq, the Democratic Republic of Congo, Afghanistan, and Zimbabwe, are now preserved and available to researchers through CRL.

The LC field offices in Nairobi, Cairo, and Islamabad proposed several projects to the Cooperative Africana Materials Project (CAMP), Middle East Materials Project (MEMP), and the South Asia Microform Project (SAMP). The funding provided by the AMPs and CRL, often combined with contributions from other interested institutions, resulted in the preservation of a large body of international newspapers that may otherwise have been lost to scholars.

The standard practice of the Library of Congress for many years has been to microfilm newspapers collected by its overseas offices. Newspaper issues are typically collated in the field and sent to Washington, DC, or to New Delhi, India for preservation microfilming. In recent years, budget reductions forced the Library to reduce the amount of content it preserves annually. In addition, the increasing volume of newspapers published (often in short runs) makes it difficult for the field offices to keep current with the backlog of newspapers collected.

An additional key benefit of CRL support in this area is that these materials are now widely available to North American scholars. The materials are easily accessible through CRL's generous loan policies to AMP and CRL member libraries.

In FY 2018 the Middle East Materials Project (MEMP) microfilmed Arab-language publications from several diaspora communities in non-Arab countries, including the UK, Japan, the U.S., and Poland. These resources continue to affirm MEMP’s role as a provider of rare and distinctive documentation for scholars.
END_OF_DOCUMENT_TOKEN_TO_BE_REPLACED