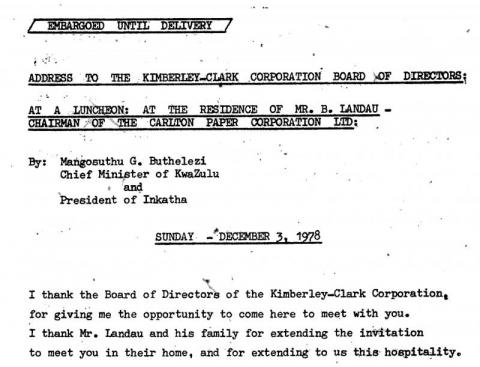 Dec. 3, 1978 speech to the Board of Directors of Kimberly-Clark Corporation

Chief Mangosuthu Buthelezi was born in 1928 into the Zulu royal family. As the first-born son, he became Chief of the Buthelezi clan in 1953. In 1970, he became Chief Executive Officer of the Kwazulu Territorial Authority, which the government intended to serve as a transitional authority toward full homeland independence.

In line with his growing cooperation with the government, Buthelezi opposed anti-apartheid sanctions. As anti-apartheid leaders inside South Africa and abroad demanded sanctions, Buthelezi came to be regarded a government puppet along with other Bantustan leaders. His tribal loyalties and focus on ethnic interests over national unity were also criticized, leading to a virtual civil war between his Zulu loyalist supporters and African National Congress (ANC) members in KwaZulu Natal.

After the release of all political prisoners and the formation of the Convention for Democratic South Africa (CODESA), Buthelezi represented the Inkatha Freedom Party in the negotiation for a democratic South Africa. In the run up to the election, he withdrew from negotiations and political violence erupted once more between IFP and ANC supporters. Just before the first democratic election he reconsidered, and precipitated a last-minute rush to include the IFP on the ballot. After this election, Buthelezi served as Minister of Home Affairs for two terms.